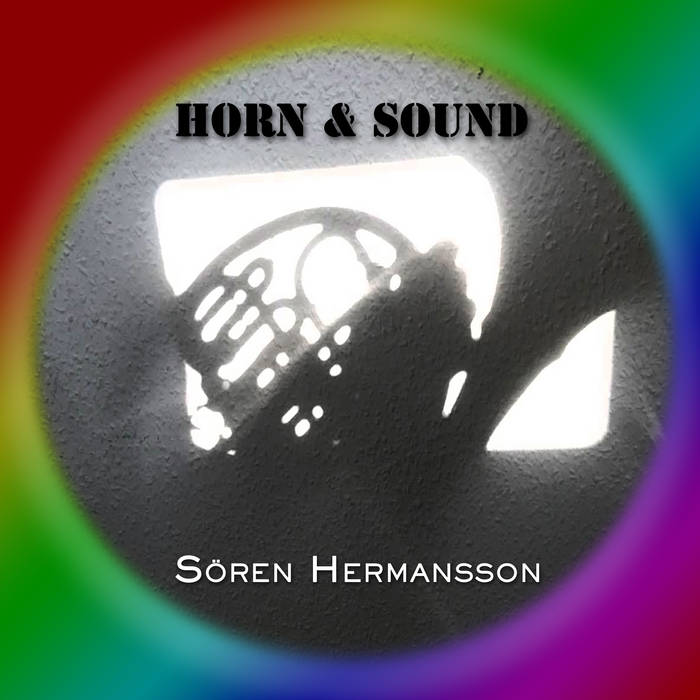 "This disc showcases Sören Hermansson's incredible horn playing and his collaborative work with composers over the past decades. His contribution to horn repertoire is laudable and this disc is a must-have for anyone interested in music for horn and electronics." -International Horn Society Magazine

"I have selected seven pieces for horn and electronics, all composed for me. All pieces are world premieres with the exception of track 7, I Am – Are You? The composer of each piece has produced the electronics track on which the french horn part has been recorded. I have had the pleasure to frequently perform these pieces live. I hope you will enjoy this musical journey with lots of extended horn-techniques, involving quarter tones, flutter-tonguing and more.”
Sören Hermansson

1 Marcus Fjellström (1979-2017) Deanimator
There is a man-machine theme running through Deanimator, as the intention was to “fuse something organic with the mechanical, the natural with the artificial, the metal with the flesh,” Fjellström explains. “I have always been fascinated by the relationship between a human performer and electronic music in performances, and I wanted to combine these two in an organic, physical, almost visceral way, as the electronics track evokes physical aspects such as the electric, the mechanical and the metallic, juxtaposed with the organic and warm physicality of the french horn player. The man-machine theme, as well as the echoes of industrial music within the piece, was in part inspired by the fact that Hermansson lived in Berlin in the
early 1980s as a student of Gerd Seifert at the Karajan Academy, and got to perform with the Berlin Philharmonic under Herbert von Karajan. The significant musical flip side of Berlin at this time was, of course, the emergence of Einsturzende Neubaten, giving Berlin a strong industrial identity in the early 1980s with music, poetry and performance art.”

2 Leilei Tian (1971) OM
OM is a mystical Sanskrit sound of Hindu origin. The syllable consists of three phonemes: a, u and m, which symbolise the
beginning, duration and dissolution of the universe. Hindus believe that a creation began the divine, all encompassing consciousness took the form of the first and original vibration manifesting as sound "OM". Before creation began it was the emptiness or the void. The vibration of "OM" symbolises the manifestation God in form. "OM" is the reflection of the absolute reality, which is without beginning or the end and embracing all that exists.

3 Jenny Hettne (1977) Calling, Undulating
Vibrating cries; a calling that breaks through the street buzzing, or the silence. Cries that ask for attention in an urban environment, or at windblown mountains. Calling, Undulating was written for and in collaboration with Sören Hermansson in 2019. The emerging melody is Vall-låt från Offerdal, a folk tune used when grazing the cattle in Jämtland, a region in the north of Sweden.

4 Per Mårtensson (1967) Define
Define for horn and electronics is the first piece of a trilogy. It is based on elaborate timbre work on the live horn transformed in the computer by convolving the signal with prerecorded classical pieces featuring horn solos. The presence of this historical material varies a lot during the performance of the piece but is more recognisable towards the end of the piece. The other musical material used here are different kinds of noise, wobbly tone generators and a fixed pitch sequence used in loop in the live horn part.

5 Åke Parmerud (1953) Dark Harbour
Dark Harbour is inspired by the sounds of Gothenburg harbour where sometimes the steam pipes of the boats create powerful harmonies. Recorded sounds from steam pipes and various other horns such as lorries were used to create the electronic part of the piece.

6 Joakim Sandgren (1965) Bifurcations Simples
Sandgren wrote Bifurcations Simples for Sören Hermansson in 2016 just finishing a larger piece. “It went swiftly and was fun. We had met sometimes before, to work out the technicalities and possibilities. The circumstances made it impossible to realize the piece that year, and in 2018 we retook the work, discovered more details and finished the piece, which was premiered in Stockholm at a portrait concert of me. It is a great pleasure to work with Sören and the exquisite precision he offers. The piece is dedicated to him,” Sandgren tells in an interview. “The composition explores the slowest part of my notated tremolo part that aren’t tremolos anymore and the small form takes us on a voyage through different states of tempos and cell patterns.”

7 Marie Samuelsson (1956) I Am - Are You?
I Am - Are You? is a piece for french horn, voice and tape, Text by Magnus William-Olsson, the voice part is performed by Dana Johnson. Here the voice is the bracing wire, and the repeating phrases, teasingly insisting, egg on the fluttering, painting heartbeat of the instrument to an ever higher pulse. "I Am the One, I am the Horn." When the voice rests, the horn can spread out, take its place, and sound like a foghorn before voice and tone force one another to change places again, like a mocking game of identities. "Are You the One?" "Are You Struggling?" Whisperings, calls, proximity, distance, in an intimate act that ebbs out into a fusion. In the turbulence of being both interchanged with and thrown out by the order, the question arises-are you also me?

Track 7 was originally released on the album PSCD 147 on the Phono Suecia label. Recorded and originally mastered in May 2002 in Hägersten by Torbjörn Samuelsson. Original recording produced by Håkan Elmqvist. Licensed to Blue Music Group in 2020 by Svensk Musik. Remastered by Mika Pohjola.

Sören Hermansson is a Swedish, internationally known performer, recording artist and educator. He studied in Stockholm, Amsterdam and West-Berlin – at the Karajan-Academy – and has held orchestral positions in Norrköping and Gothenburg Symphony Orchestras. Since 1988, Sören Hermansson has devoted his time to a solo career and teaching. He has performed in North and South America and several countries in Europe.

Sören Hermansson has commissioned and premiered about sixty works for horn. In addition, he has recorded many of these works which have received critical acclaim. He has world premiered horn concertos by Anders Eliasson, Folke Rabe, Pehr-Henrik Nordgren and Bengt Hambreus on recordings TV productions.

Lately, Sören Hermansson has been focusing on commissioned works for horn and electronics.

The composer of each track - Electronics