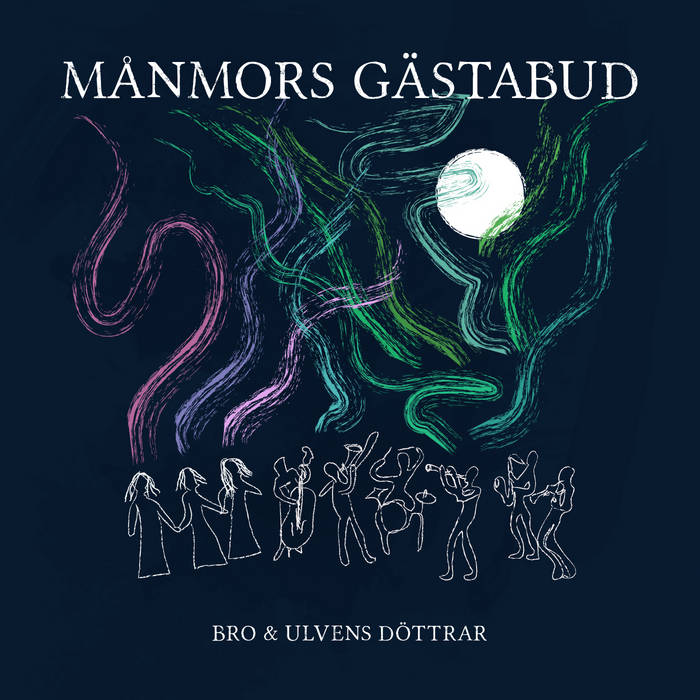 Dave Jamieson If you buy this, don't feel in any way inclined to buy any of the associated albums that'll be pumped your way. This one ticks the boxes, the others might not. Favorite track: Månmors gästabud.

A true gem by these Scandinavian sisters, Ulvens döttrar ("The Daughters of the Wolf"), here accompanied by one of Scandinavia's foremost big bands. This is Ulvens döttrar's third album, after the critically acclaimed "Saga" and "Blue Draught."

Johanna Grüssner (vocals, djembe, ankle bells, frame drum) has graduated from Berklee College of Music and Manhattan School of Music and works as a professional jazz vocalist, choral conductor, music producer and vocal instructor. She has released ten solo albums in addition to those with Ulvens Döttrar.

Isabella Grüssner-Sarling (vocals, spring drum, clocks, tambourine, rainstick, jew's harp) has a master of education from Åbo Akademi University, specialized in music and the Swedish language. She freelances as a cultural worker mostly hired as a director for plays and as a writer. She writes lyrics for Ulvens Döttrar and several other music groups.

Bothnia Rhythm Orchestra (BRO) is a big band with some of the most creative musicians in the Nothern Gulf of Bothnia region of Sweden and Finland. BRO was founded in 2013 by saxophonist Peter Nordwall and trumpetists Tobias Udd and Henrik Sjöberg. The album "Månmors Gästabud" is the first collaborative album between BRO and Ulvens Döttrar. Ulvens Döttrar come from the western Finnish archipelago, the Åland Islands, in the Baltic Sea. They primarily perform original songs influenced by ethnic Nordic folk music, and songs from the Viking age. They are also inspired by dramatic folk rock, Latin rhythms, and the mystery of nature. Ulvens Döttrar always performs its music live. They play instruments like jew's harp, fiddle, didgeridoo, djembe drum, rainstick and key harp. However, their main instruments are their voices mostly sung in three-part harmony and used for special effects.

"Månmors gästabud" makes a very interesting musical meeting between the characteristic music of folk melodies and harmonies, combined with the powerful rhythmic, harmonic and rich sounds of a Big Band. Ralf Nyqvist - a pianist, composer and conductor based in Vaasa, Finland - also composed two compositions for BRO and Ulvens Döttrar.

Ulvens Rop was composed while Ralf was visiting Visby in Gotland. The tune is a traditional fiddler melody with a Northern character, and a mantra repeating in the melodies and voices. The arrangement is a dialogue between the vocals and the orchestra, with an open section for piano and saxophone solos. There is also a short a passage with "kulning", an ancient singing method for people to call the animals by simulating the sounds of the wolf. This piece is a tribute to Bengt-Arne Wallin who combined the traditions from Northern folk music with big band music.

Song for the Stones was also composed in Visby, and its inspiration comes from the stones along with the waves making sounds at the shore. This song is also a melody with no lyrics and it has a Medieval character combined with a modern funk groove in the background. The melody in simple triple time has a background in compound duple which gives the music a great swinging character. The modal mood is conveyed by a trombone solo and the arrangement gives room for a dialogue, with an oriental touch, heard in the three voices and the big band.

Amanda Sedgwick (alto-, soprano saxophone, flute and clarinet) has worked as a musician, composer and leader of her own groups in Sweden, Holland and the US for fifteen years. She has released four records under her name which also shows her tallent in composing: "Volt", "Reunion", "Delightness" and "Shadow And Act", which was released in September last 2014. Presently Amanda resides in Stockholm, making lengthy visits in New York City, where she can at times be heard at jazz club Smalls, with Freddie Redd, Sacha Perry, Leroy Williams and Dwayne Clemons. She leads her own quintet, also with Dwayne Clemons on trumpet, and can be heard with numerous Swedish small groups and big bands.

Michael Ford (alto saxophone, flute, clarinet and bassoon) studied at Trinity College of Music London, playing in the college Big Band under Bobby Lamb from Woody Hermans band. He has since pursued a successful free-lance career, playing in many orchestras and Big Bands throughout the UK, many shows including the London West End productions of 'Phantom of the Opera', 'Miss Saigon', and 'My Fair Lady', and appearing many times on UK TV, including playing saxophone for Sir Cliff Richard on the Michael Parkinson show. Since living in Finland Michael has worked in theatres in Vasa, Seinäjoki and Helsinki, plays in Jakobstads Sinfonietta and the Kokkola Chamber Orchestra, as well as Big Bands throughout Ostrobotnia, with people such as Sid Hille, Jukka Linkola and Ralf Nyqvist.

Peter Nordwall (tenor-, soprano saxophone, flute, alto flute and clarinets) has played with numerous different musicians such as Max Schultz, Victoria Tolstoj, Bobby Shew, Tim Hagans and numerous big bands such as Norrbotten Big Band, Sandviken Big Band etc. Peter has played at about 60 recordings and has made four albums under his own name. The latest CD, Leaving Home, got rave reviews from the jazz magazines Jazzrytmit, 7, Blaskan, Lira and OrkesterJournalen. "Peter Nordwall deserves a breakthrough as he belongs to the outmost jazz elite in the northern countries..." Leaving Home, Blaskan. Peter is frequently engaged in theatre and television productions and has been rewarded with many scholarships from Konstsamfundet, two one-year grants from Svenska Kulturfonden, Harry Schaumans stiftelse, Österbottens Kulturfond and the city of Vaasa.

Andreas Gidlund (tenor-, soprano saxophone, flute and clarinet) was a huge success with his young quartet in the early 2000s. Since then, Andreas has remained present in the music industry by frequently touring (Andreas has toured in Europe, Japan, USA, Jamaica and Brazil.) and he has released several notable albums as well as playing in Sweden. In addition, Andreas has run his own jazz club.

Fredrik Lindborg (baritone saxophone and bass clarinet) grew up with the history of jazz. Fredrik currently plays with many of the great jazz musicians and big bands in the northern countries such as Norrbotten Big Band, Bohuslän Big Band, Stockholm Swing all Stars and many others. In 2012 Fredrik was rewarded the prestigious price "Guldsaxen", in memory of Arne Domnérus. Fredriks CDs have received rave reviews. His last CD "Trio Coloccus" got four stars in Down Beat.

Kasperi Sarikoski (lead trombone) is one of Finland's most sought-after trombone players. Kasperi has played with many famous musicians and orchestras, such as Jerry Bergonzi, Dave Liebman, Peter Erskine, UMO Jazz Orchestra, Ricky-Tick Big Band, Henry Otto Donner and Teppo Mäkynen. Kasperi leads his own ensemble, "Nuance". After his studies at the Sibelius Academy and the conservatory of Paris, he received his master's in 2013.

Peter Fredriksson (trombone) is borned and raised in Sandviken, Sweden. Peter is one of Sweden's most engaged trombone players and has played with Stockholm Jazz Orchestra, Blue House Jazz Orchestra, Bohuslän Big Band, Norrbotten Big Band, Mats Holmquist Stora Stygga, Ann-Sofi Söderkvist Jazz Orchestra, Peter Asplund Big Band and Håkan Broströms New Places Orchestra. Peter is also the bandleader for The Quiet Nights Orchestra which he started in 2006. He plays in many different ensembles, among others in the band Calle Real which tours worldwide. Nowadays Peter is the chairman for the jazz festival Bangen Jazz & Blues in Sandviken.

Staffan Findin (trombone) has since graduating from the Royal College of Music in Stockholm worked as a freelance musician. He has been working in studio with Eric Bibb, Ariana Grande, Cee Lo Green, Shout out Louds, Peter Björn & John and Nicolai Dunger. Staffan has also been playing in different musicals such as Jesus Christ Superstar, West Side Story, Priscilla and Livet är en Schlager. Staffan has also been touring with Brian Wilson, Avishai Cohen and Amanda Jenssen.

Henrik Sjöberg (trumpet and flugelhorn) has been playing trumpet for almost 40 years now. Henrik is a frequent employed musician in Umeå, but has also been touring in Sweden and Europe with different productions. He has also been playing at Norrlandsoperan, Norrbottensteatern, Västerbottensteatern and the Swedish Theatre in Helsinki. Henrik is playing in many different Big Bands and is also working as a band leader in some of theese. Henrik has also been doing studio sessions with different artists, the latest with Nathalie "CLEO" Missaoui.

Janne Toivonen (trumpet and flugelhorn) is one of Finland's most sought-after jazz trumpet players. Janne is playing in various bands such as Aili Ikonen & Tribute to Ella, The Big Combo, Mikko Pellinen Mini Big Band and Reactor-5 that won the competition Young Nordic Jazz Comets in Finland 2005. Janne can also be listened to on the Dallapé, UMO Jazz Orchestra, Riku Niemi Orchestra, J. Karjalainen, Ismo Alanko and Jukka Poika recordings. Janne who originally comes from the small town of Ilmajoki, started his career at the Finnish west coast with Kvarken Big Band under the conductor of Ralf Nyqvist. Janne now lives in Helsinki and studies trumpet at the Sibelius_Academy jazz program. He has been touring in Europe with Tuomari Nurmio and Hector and with legendary Caribbean names such as Michele Henderson, Exile One and Jean-Philippe Marthèly.

Tobias "Bisse" Udd (trumpet and flugelhorn) begun playing the trumpet in Närpes Youth Orchestra in his hometown Närpes, Ostrobothnia, Finland. After elementary school he moved to Jakobstad to study music full time and received his Bachelor's Degree in 2006 from Svenska Yrkeshögskolan. Between 2007-2011 Tobias studied at the Sibelius Academy and achieved his master degree in performing arts. Tobias who is classically trained has performed with several orchestras in Finland such as the Vaasa City Orchestra, Helsinki Philharmonic Orchestra and Avanti!.

Mikael Jakobsson (piano) is working as a lecturer in improvisation at Metropolia in Helsinki. Mikael is a member of many different bands and has been touring around the world playing at some of the most known festivals such as North Sea Jazz Festival, Roskilde Festival, Pori Jazz Festival. Mikael has also been playing with many national and international artists such as Umo Jazz Orchestra, Randy Brecker, Tim Hagans, Jon Faddis, Jukkis Uotila, Wayne Kranz etc. Mikael has studied at the Sibelius Academy in Helsinki.

Olli Rantala (double bass) is a multi-instrumentalist with electric- and double bass as his main instruments. Olli is originally from Vaasa but now lives in Gothenburg. Olli works as a freelance musician, theatre musician and teacher. Today Olli is a much coveted bass player in many different genres: world music, tango and jazz.

Markus Ketola (drums) has besides his main instrument been studying piano, classical percussion and composition. In 2007 Markus achieved his Doctoral Degree at the Sibelius Academy. Markus has been playing in the UMO Jazz Orchestra since 1993 and has also performed with the NDR Big Band (Hamburg) and Norrbotten Big Band (Luleå). Markus has also been playing with many international musicians, Michael Brecker, John Scofield and Dave Liebman to name a few.