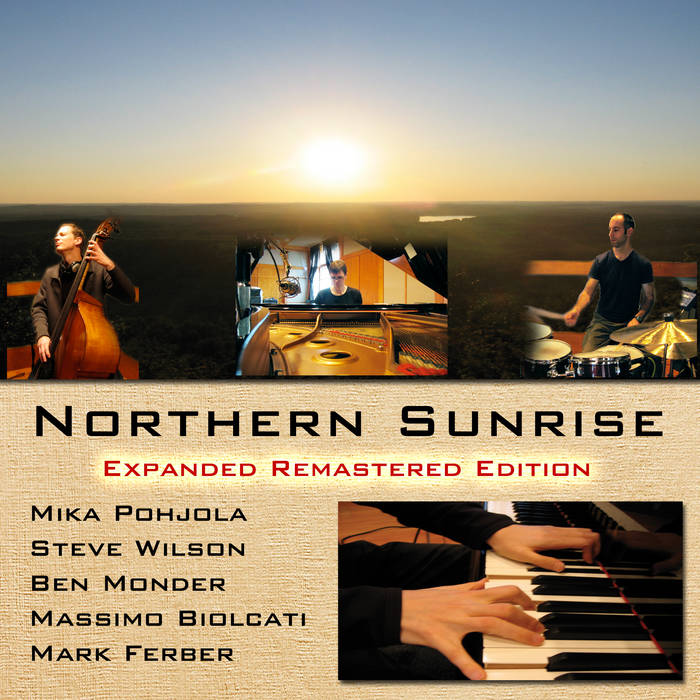 "One of the best" All About Jazz.
Northern Sunrise is a deep compositional and improvisational thesis by New York recording veteran, pianist and composer Mika Pohjola. The album covers a wide range of previously unheard harmonic and rhythmic territory. Needless to say, Northern Sunrise is Pohjola's most versatile and imaginative work to date, featuring saxophonist Steve Wilson, guitarist Ben Monder, bassist Massimo Biolcati and drummer Mark Ferber. Pohjola has recorded twenty-five albums on his own name, ranging from solo piano improvisations to massive orchestral productions. Pohjola's music is, however, always about inclusiveness and interaction. "I know I have succeeded when everyone in my band sounds at their best." Indeed, few have achieved such a balance between composition and free improvisation.

Mika Pohjola was born in Helsinki, Finland, but he moved to the United States in the early 1990s. He has lived in New York City since 1995. He briefly studied with pianist Sal Mosca, before his first major album was produced by Gunther Schuller. Pohjola's touring and recording sidemen include Miguel Zenón, Ben Monder, Chris Cheek, Drew Gress, Mark Ferber, Fernando Huergo, Mick Goodrick and many more. Pohjola is a Steinway Distingued Artist since 1997, and a major visiting artist at Berklee College of Music since 2006. A part from his jazz career, Pohjola has been commissioned to write classical works.

"In our constantly evolving musical syntax the phrase 'global jazz' is showing up with increasing frequency. Usually the term's connotation is simply geographic, as in 'jazz from around the globe;' but, with the help of artists like Mika Pohjola, it is evolving to have a deeper cultural significance. The young Finnish pianist and composer is one of those artists who would make the universal language of jazz the lingua franca of this bold new age. His Northern Sunrise offers a smorgasbord of subliminal connectivity that reaches across and a bit under the surface of the planet." -Jazz.com

"Mika's playing, writing and listening skills are unique. He does it all with ease. Very few can do all these things so masterfully."
-Gary Burton