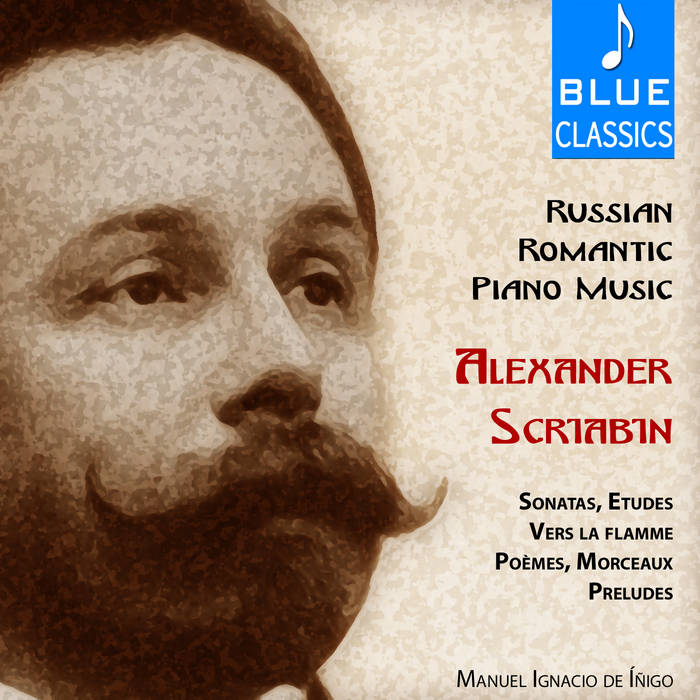 Alexander Scriabin (6 January 1872 [O.S. 25 December 1871] - 27 April [O.S. 14 April] 1915) was a Russian composer and pianist. Scriabin, who was influenced early in his life by the work of Frédéric Chopin, composed works that are characterised by a highly tonal idiom (these works are associated with his "first stage" of compositional output). Later in his career, independently of Arnold Schoenberg, Scriabin developed a substantially atonal and much more dissonant musical system, which accorded with his personal brand of mysticism. Scriabin was influenced by synesthesia, and associated colours with the various harmonic tones of his atonal scale, while his colour-coded circle of fifths was also influenced by theosophy. He is considered by some to be the main Russian Symbolist composer.
Scriabin was one of the most innovative and most controversial of early modern composers. The Great Soviet Encyclopedia said of Scriabin that, "No composer has had more scorn heaped on him or greater love bestowed." Leo Tolstoy described Scriabin's music as "a sincere expression of genius." Scriabin had a major impact on the music world over time, and influenced composers such as Igor Stravinsky, Sergei Prokofiev, and Nikolai Roslavets. However Scriabin's importance in the Russian and then Soviet musical scene, and internationally, drastically declined after his passing. According to his biographer Bowers, "No one was more famous during their lifetime, and few were more quickly ignored after death." Nevertheless, his musical aesthetics have been reevaluated, and his ten published sonatas for piano, which arguably provided the most consistent contribution to the genre since the time of Beethoven's set, have been increasingly championed.

The Piano Sonata No. 4 in F-sharp major, Op. 30, was written in 1903. It consists of two movements, Andante and Prestissimo volando, and is the shortest of Scriabin's sonatas. The sonata is written in a post-Romantic style, similar to Scriabin's other works of the time, and the mood could be described as erotic. The first movement, expressive and calm, is monothematic (based on a single theme). The second movement, celebratory and climatic, starts attacca right after the Andante movement. A more Romantic idea is the use of cyclic form in restating the Andante's main theme (dolcissimo) as the ecstatic climax of the Prestissimo volando movement (Focosamente, giubiloso). This outlay appears closely related to the last two movements from the 3rd sonata, also linked by an attacca, where the climax of the finale likewise restates the lyrical Andante theme of the third movement.

The Piano Sonata No.5, Op. 53, is work written in 1907. This was his first sonata to be written in one movement, a format he retained from then on. Although the actual writing took only six days, from 8 to 14 December 1907, some ideas had been conceived much earlier. The initial nine bars of the first theme of the exposition, Presto con allegrezza (mm. 47 ff.), can be found in a notebook from 1905-1906, when Scriabin was in Chicago. Another notebook from 1906 contains the Imperioso theme, while elements from the Meno vivo can also be made out, as well as sketched-out passages for a few other sections. Five months after its completion, Scriabin published the work himself in Lausanne, producing an edition with 300 copies. He later gave the autograph as a present to his pupil Alfred La Liberté. In 1971 the pianist's widow gave the manuscript, along with various other documents, to the Scriabin Museum. The work was premiered on 18 November 1908 in Moscow by pianist Mark Meitschik.

The Piano Sonata No. 7, Op. 64, subtitled White Mass, was written in 1911. As one of the late piano sonatas of Scriabin's career, the music is highly chromatic and almost atonal. The White Mass is closely related to its predecessor, the sixth sonata. Both works were written in 1911-12 and have structurally and stylistically more in common than any other pair of Scriabin sonatas. Scriabin reportedly feared the sixth sonata, considering the work to be corrupted by demonic forces and going so far as to refuse to play the work in public. Scriabin composed his seventh sonata as an exorcism against the darkness of the sixth sonata, subtitling the work White Mass in order to reflect its celestial nature. He intended the mood of the piece to be ecstatic, evoking images of winged flight, voluptuous rapture and overwhelming forces. The composer was especially fond of the piece, probably due to its messianic context and perfected structure, which features more contrast, rhythmic and dynamic, than most of his work. Like the second sonata however, the White Mass gave him a great deal of trouble during its composition. The White Mass Sonata is not structurally directly related to Scriabin's ninth sonata, which was composed in 1912-13 and would later earn the nickname Black Mass Sonata.

Vers la flamme (Toward the flame), Op. 72, is one of Scriabin's last pieces for piano, written in 1914. The melody is very simple, consisting mainly of descending half steps, but the unusual harmonies and difficult tremolos create an intense, fiery luminance. This piece was intended to be Scriabin's eleventh sonata; however, he had to publish it early because of financial concerns. Hence, the piece is labelled a poem, rather than a sonata. According to pianist Vladimir Horowitz, the piece was inspired by Scriabin's eccentric conviction that a constant accumulation of heat would ultimately cause the destruction of the world. The piece's title reflects the earth's fiery destruction, and the constant emotional buildup and crescendo throughout the piece lead, ultimately, "toward the flame".

Étude in C-sharp minor, Op. 2, No. 1, is an étude for piano, written in 1887, when Scriabin was just 15 years old. It was the first of the Three Pieces, Op. 2, and was one of Scriabin's earliest successes. The melody is poignant and heartfelt, showing many characteristics of Russian Gypsy music. It is accompanied by repeated chords in both hands, featuring rich harmonies, inner voices, and large spreads in the left hand. The dynamics of the piece are varied constantly to display emotion and passion and to add interest. The piece features many key changes but finally concludes in the original key. Although it is a slow and somber piece, like many other études, it is considerably difficult to perfect.

Étude in D-sharp minor, Op. 8, No. 12, is an étude for piano composed by Alexander Scriabin in 1894. It features many technical challenges, including treacherous stretches with intervals up to an eleventh, numerous jumps in the left hand, repetitive chord strikes, and abundant octaves. It is a particular favorite among pianists and audiences alike. This piece was a favorite encore of Vladimir Horowitz. The dramatic motive and moving recitative of the solo in the upper voices on the chordal background is characteristic of Scriabin's early creations. The right hand is always playing octaves except for the piece's ending. Similarly, the left hand is continually jumping around until the final chord is struck.

Prelude in C major, Op. 11, No. 1, was composed in November 1895 in Moscow. Here Scriabin's virtuosic sustain pedaling assembles clusters of up to seven different diatonic notes in an exquisite sonority that Scriabin himself used to describe as a "psychic shift". The whole melody of this prelude consists of 240 eighth-notes, being the opening chord of this piece C-D-E-F-G-A, with the C-major tonic in the bass. The time value for each eighth note changes whenever the tempo flexes, as can be noticed in the second group of notes in the 2nd bar, which measures less than half the tempo of the second group in the 14th bar. This piece has 36 bars.