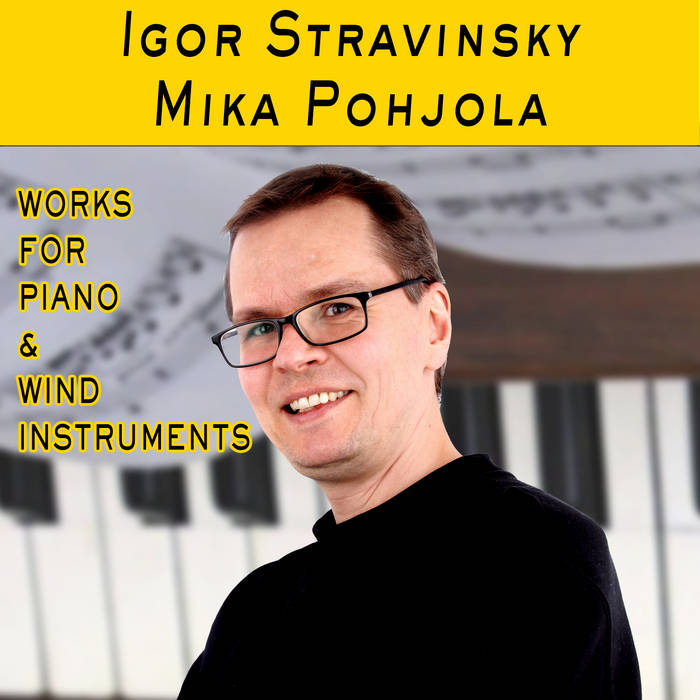 The Symphonies of Wind Instruments is a concert work written by Igor Stravinsky in 1920, for an ensemble of woodwind and brass instruments. The piece is in one movement, lasting about 9 minutes. It is dedicated to the memory of Claude Debussy, who died in 1918, and was premiered in London on June 10, 1921, conducted by Serge Koussevitzky. A piano reduction by Arthur Louri� was published in 1926 (White 1979, 292), a full score appearing only after Stravinsky re-orchestrated the work in 1947.

Three Limited Pieces is a three-movement piece for piano, with contrasting moods and composing techniques. The first movement, Correo Electrónico (which means "email"), is inspired of communication with next to no nuance or emotional expression, typical for completely missing in email correspondence. The second movement, Three Clowns, is a three-part "description" of lamenting clowns, whose job it is to be funny and entertaining, but in fact feel the opposite in private. The third movement, Running, has a stressful and unbalanced character, where the harmony is at times consonant, at times missing. Running expresses approximately: "There is no time to concentrate on details in this busy life. All that is important is to get away from the stress which only accumulates."

Originally written for the odd instrumentation of recorder, cello and trombone, this is an expanded version for wind orchestra with percussion, harp and celesta. A wedding brings lots of expectations, and not every time everything during the procession is perfect.

Allemande & Humoresque is a two-movement piece for flute, clarinet and piano (originally flute, violin and piano). The Allemande is a baroque-like movement with a typical AABB form, where the piano harmonies are derived mostly from the missing chromatic notes of the key, in other words all the "wrong" notes. The Humoresque is a less solemn movement in an Argentinean 6/8 Chacarera rhythm.

Serenade in A is a work for solo piano by Russian composer Igor Stravinsky. Completed on September 9, 1925, in Vienna and published by Boosey & Hawkes, it resulted from his signing his first gramophone recording contract, for Brunswick, and was written so that each movement could fit on one side of a 78 rpm record. The dedicatee was Stravinsky's wife Katya.

Despite its title, the work is in neither A major nor A minor. According to Eric White, A is not the "key" of the work, but rather the music radiates from and tends towards A as a "tonic pole". Thus, the first and the last chord of each movement contains the note A, either as the root, third, or fifth of a triad. According to Stravinsky, the piece was conceived "in imitation of the Nachtmusik of the eighteenth century, which was usually commissioned by patron princes for various festive occasions, and included, as did the suites, an indeterminate number of pieces". Therefore, the movement titles are meant to evoke the specific parts of such festive celebration.

From the pianist's perspective "Hymne" is related to Frédéric Chopin's Ballade No. 2, while the "Cadenza finala" reflects Stravinsky's Russian heritage.