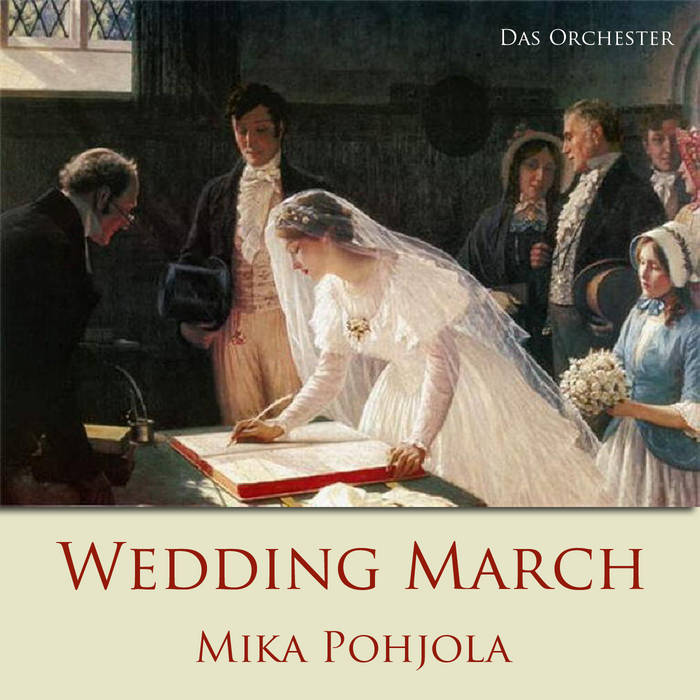 Wedding music applies to music played at wedding celebrations, including the ceremony and any festivities before or after the event. The music can be performed live by instrumentalists and/or vocalists or may use pre-recorded songs, depending on the format of the event, traditions associated with the prevailing culture and the wishes of the couple being married.

This Wedding March was written by Finnish-American pianist and composer Mika Pohjola in 2014, and the performance is by the Swedish contemporary trio, Das Orchester, consisting of Kerstin Frödin, recorder; Chrichan Larson, cello; and Ivo Nilsson, trombone.

A wedding is a ceremony where two people are united in marriage. Wedding traditions and customs vary greatly between cultures, ethnic groups, religions, countries, and social classes. Most wedding ceremonies involve an exchange of wedding vows by the couple, presentation of a gift (offering, ring(s), symbolic item, flowers, money), and a public proclamation of marriage by an authority figure. Special wedding garments are often worn, and the ceremony is sometimes followed by a wedding reception. Music, poetry, prayers or readings from religious texts or literature are also commonly incorporated into the ceremony.

A number of cultures have adopted the traditional Western custom of the white wedding, in which a bride wears a white wedding dress and veil. This tradition was popularized through the wedding of Queen Victoria. Some say Victoria's choice of a white gown may have simply been a sign of extravagance, but may have also been influenced by the values she held which emphasized sexual purity. Within the modern 'white wedding' tradition, a white dress and veil are unusual choices for a woman's second or subsequent wedding.

The use of a wedding ring has long been part of religious weddings in Europe and America, but the origin of the tradition is unclear. One possibility is the Roman belief in the Vena Amoris, which was believed to be a blood vessel that ran from the fourth finger (ring finger) directly to the heart, thus when a couple wore rings on this finger their hearts were connected. Historian Vicki Howard points out that the belief in the "ancient" quality of the practice is most likely a modern invention. "Double ring" ceremonies are also a modern practice, a groom's wedding band not appearing in the United States until the early 20th century.

The wedding ceremony is often followed by wedding reception or a wedding breakfast, in which the rituals may include speeches from the groom, best man, father of the bride and possibly the bride, the newlyweds' first dance as a couple, and the cutting of an elegant wedding cake.